By Faheem ud Din on November 8, 2013 in Wallpapers

In the opening week, Call of Duty: Ghosts has received a splendid response from gamers all around the world, specially the Call of Duty fans. Within a short duration, it has sold several million copies and have given more than a billion dollars to its publisher, Activision. The game is set in an alternate timeline based on the post-era of nuked devastation of Middle East. Amidst the war between the South American based Federation and Central America, Ghosts emerge to protect Central America against the Federation. If you are a fan of bewildering plot twists, plentiful spectacular situations, and non-stop action, Call of Duty: Ghosts is just the game for you. With abundance of witty refinements in its multiplayer, Call of Duty: Ghosts is a refreshing entry in first person shooter arena. So for the hardcore fans of COD: Ghosts and the soon-to-be fans, we’ve got plentiful collection of Wallpapers which you’ll adore.

Leave your feedback in the comments below. If you have more Call of Duty: Ghost wallpapers, we’ll be happy to include them in our Wallpapers gallery. 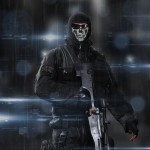