Around 15 days are left to the last sunset of 2013; I believe it was a pretty good year for us, gamers. Titles like Assassin’s Creed IV, Grand Theft Auto V, The Last of US and the beautiful Tomb Raider are some good examples to what 2013 brought for us. GamersTarget have complied a list of 10 games which appealed us the most.

The Legend of Zelda: A link Between Worlds

The latest sequel of The Legend of Zelda requires a hero to save Hyrule. This part is based upon a top two-dimensional gameplay (such as A Link to the Past) along with amazing puzzles and adventures.

Developed & Published by Red Barrels, Outlast is a survival horror game in which you play as Miles Upshur – A journalist who went to investigate Mount Massive Asylum realizes that there is more to what people think of. All he has is a video camera and a flash-light by which he has to survive!

Probably the best multiplayer game for WII U in 2013. You can play with three other friends in a beautiful three-dimensional world. The characters you can choose from are Mario, Luigi, Peach and Toad who will have to solve epic puzzles and play games with one-another to reach the top.

Proteus is a very unique open world game. Each stage has a different environment from the last one. You have to follow different steps depending on the surroundings (trees, rocks, ocean, flowers etc.)

Well well well, sales of U.S$800 million withinin 24 hours and US$1 billion within the first three days of the release say a lot. Grand Theft Auto V creates a new level for the open-world genre. It has amazing visuals, epic gameplay and a fun/interesting story divided between three characters you’ll have to play with.

Injustice: Gods among Us

Released for almost all the platforms, Injustice: Gods Among Us is our favorite in the fighting genre. There are numerous complicated move sets added to the game. Batman, Superman & Wonder Woman are some example of the characters you’ll be fighting it. The story mode is really interesting as it shows a world without Justice League operating. 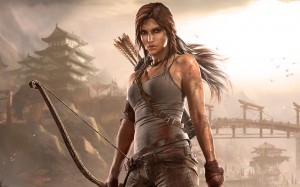 My personal favorite – Tomb Raider (2013) is a re-make of the original; a young archaeology student stuck on a mysterious island as her ship crashed. You are caught between a deadly cult and need to rescue/escape along with your friends. The visuals, gameplay and the story are superb.

A successor to the 2007 sequel, BioShock Infinite is a First Person Shooter game in which you play as Booker DeWitt whose objective is to “deliver the girl & wipe away the debt”. The combination of the phenomenal first-person gameplay and the epic dialogues makes it one of the best games of the year.

The fourth sequel of the famous Assassins Creed will take you to captain Edward Kenway, a pirate of the Caribbean in the 18th century. Black Flag has a huge explorable world with pretty graphics and mouth-watering ship-to-ship battles.

The Last Of Us

The last game on our list, The Last Of Us is a PlayStation 3 exclusive and a piece of work which almost all other consoles will definitely miss.

A fungal infection is turning everyone into monsters and you must survive as Joel – a middle-aged young man who is helping Ellie (a girl who might know how to cure all the mess around) All of this is set in a haunted world full of beautiful visuals and creepy footsteps!

View all posts by Afnan Mir →